Rickmansworth is a stop on the Metropolitan Line in Hertfordshire. It is also served by Chiltern Railways services between London Marylebone and Aylesbury.

The station was opened by the Metropolitan Railway in 1887 on it's extension from Pinner. It served as the line's terminus for two years before the line was extended to Chesham. The Great Central Railway also used Rickmansworth on it's services into London Marylebone.

The Metropolitan Railway electrified the line as far as Rickmansworth in 1925. The station was used for the changeover between electric and steam locomotives until the line was electrified out to Amersham in the early 1960s [1].

The station has two platforms in use, the bay platform still exists but is seldom used nowadays. Rickmansworth is used as a crew changeover point for Metropolitan Line trains and there is also stabling nearby [2]. Access between the two platforms is via a subway.

Gloucester is a stop off the Bristol-Birmingham Line which due to a complicated legacy and rationalised layout means many trains have to reverse which call there to continue onward with their journeys.

A station at Gloucester was first opened in 1840 by the Birmingham & Gloucester Railway, the new station being the line's terminus. The Cheltenham & Great Western Union Railway arrived next with a broad gauge line from Swindon in 1844. This line later became part of the Great Western Railway and was converted to mixed-gauge.

The Midland Railway arrived the year after and the South Wales Railway in 1851. The complicated layout of the station and the fact it began life as a terminus meant that GWR trains had to reverse to continue between London and Cheltenham Spa. This practice continues to this day. Both the GWR and MR built new stations in the latter half of the nineteenth century linked by a footbridge to replace the original Gloucester station. They were known as Gloucester Central and Gloucester Eastgate respectively.

British Rail rationalised the railway layout in the 1960s and 1970s, closing Gloucester Eastgate in 1975, leaving Gloucester Central as the remaining station today. The station was rebuilt and one of the platforms extended to about six hundred and three metres long so it could host two High Speed Trains simultaneously, the platform is the second longest in the country after Colchester - though is split into two officially.

The station has had a new footbridge with lifts and a refurbished booking hall over the last couple of years though there have been calls for a complete rebuild of the station. There have indeed been proposals to build a brand new station on a new site which would remove the need for reversals though these proposals have so far come to nothing. Gloucester is served by Great Western Railway, Cross Country and Transport for Wales.

Leicester is a major stop on the Midland Main Line as well as services throughout the East Midlands.

The current main building dates from a major rebuilding in the 1890s when the station was renamed Leicester London Road. It was built with an overall roof over the platforms though this deteriorated in condition after being damaged in the Second World War, the remains were finally removed in the mid-1970s [1]. The name was changed back to simply Leicester in 1969 after the closure of two other stations in the city. Further changes to the station including the current booking hall and the platform facilities date from modernisation in the late 1970s.

The station has four platforms and is a major stop on East Midland Trains services between London St. Pancras and the North, there are also regular services to other destinations such as Birmingham New St, Derby and Loughborough by EMT and Cross Country.

The station was opened by the Metropolitan Railway and Metropolitan District Railway in 1868 [1]. A couple of years later an "Outer Circle" service operated by the North London Railway out of Broad Street to Willesden Junction began. Another service that began in 1872 was the "Middle Circle" between Moorgate and Paddington. These services were withdrawn or cut back by the start of the twentieth century. One service that did survive was the "Inner Circle" which became the Circle Line.

The sub-surface platforms (which are actually in the open air - there was once a roof over the platforms) now consist of a single island platform though once had seven platforms for the services mentioned above. The Piccadilly Line reached South Kensington in 1906 on it's Westward expansion to Hammersmith.

South Kensington is now served by the Circle, District and Piccadilly Lines.

Email ThisBlogThis!Share to TwitterShare to FacebookShare to Pinterest
+ London, S, Transport for London

York is about half way between London Kings Cross and Edinburgh on the East Coast Main Line and is a major junction and railway hub in the North East. It is also next to the National Railway Museum (see below).

Most platforms are covered by a long curving roof. The station was extensively damaged in the Second World War by bombing but was repaired in 1947 and is now Grade II* listed.

York once had fifteen platforms though some have been removed due to remodelling, a major example taking place in 1988 as part of the East Coast Main Line's electrification. The station was renovated in 2009. York is currently managed by London Northeastern Railway (LNER) and is also served by Cross Country, East Midlands Trains, Northern, Hull Trains, Trans Pennine Express and Grand Central.

The National Railway Museum is home to much of the National Collection of rolling stock and other preserved items. The museum was opened on the site of a former roundhouse next to the ECML (and York station) in 1975. Exhibits include Mallard, Flying Scotsman and the first Modernisation Plan diesel locomotive D8000 (below). 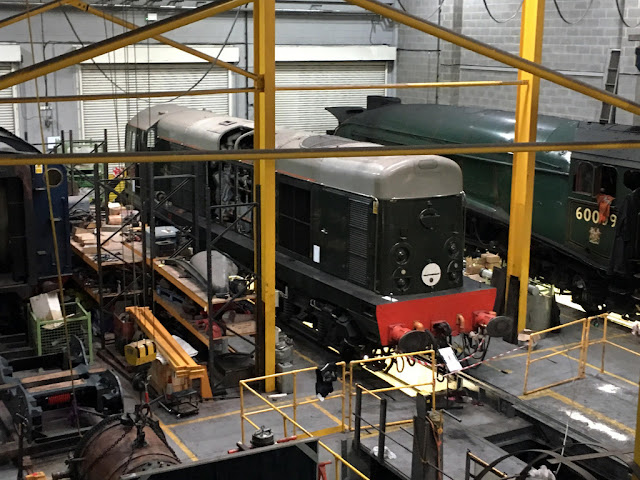 Warwick serves the county town of Warwickshire, though has been rather overshadowed since the opening of Warwick Parkway in 2000 which has a better intercity service and much better parking.

Warwick was opened by the Great Western Railway in 1852 on it's line between Oxford and Birmingham. The station was expanded in 1890 with the platforms lengthened. Warwick once had a bay siding for a bank engine to assist heavy goods trains up Hatton bank towards Birmingham.

Warwick had two goods yards, one for the gas works and the other for the Royal Agricultural Society which held shows nearby [1]. The goods yards and bay siding have now gone following rationalisation in the mid-1960s, as have the station buildings on the Up (London) line. The station building on the Down line still survives. The station has a small cafe and waiting room. Access between the platforms is via a subway.

The station is managed by Chiltern Railways who supply most services to the station on the Birmingham-London Marylebone route and services to Leamington Spa either from Stratford-upon-Avon or Birmingham Moor Street. West Midlands Railway also stop at the station at peak times.

Finsbury Park is a major interchange station on the Great Northern routes out of Moorgate and London Kings Cross, as well as being a stop on the London Underground's Piccadilly and Victoria Lines.

The station was first opened as Seven Sisters Road (Holloway) by the Great Northern Railway in 1861 on the East Coast Main Line out of London Kings Cross. The station was renamed Finsbury Park in 1869 after the Edgware, Highgate & London Railway built a line from the station to Edgware.

In 1904 what became the Northern City Line was built linking from Moorgate through Finsbury Park. The Piccadilly Line arrived in 1906 [1] though the current route dates from 1932 and the line's extension through to Cockfosters.

Finsbury Park has, can be seen, a complicated history and resulting interchange of different lines and services (including two bus stations). The National Rail and London Underground stations are fully integrated though have separate ticket offices.

Nowadays a single platform halt Bedford St Johns was Bedford's first station though is much changed since it opened in the mid-nineteenth century.

It was opened as Bedford by the Buckinghamshire Railway as part of the Oxford-Cambridge Line (more commonly known as the Varsity Line) in 1846. Confusingly the Midland Railway also called their station Bedford which they opened in 1859. In 1924 the original station was renamed Bedford St Johns and the newer station Bedford Midland Road.

The Varsity Line began to be closed in the late 1960s leaving just the route from Bedford St Johns to Bletchley. The original Bedford St Johns, by then a terminus, was closed in 1984 and a new single platform halt built on a new chord line to Bedford. The Bedford-Bletchley route is now known as the Marston Vale Line.

Bedford St Johns is a basic unmanned stop with just a single bus shelter and a passenger information screen. There are firm plans to re-open the Varsity Line which means Bedford St Johns could be restored as a more substantial station one day.

Email ThisBlogThis!Share to TwitterShare to FacebookShare to Pinterest
+ B, Bedfordshire, National Rail

The railway reached Princes Risborough in Buckinghamshire via the Wycombe Railway in 1862 when a line from High Wycombe was extended to Thame with a branch also being built through to Aylesbury. This line was built to broad gauge though was converted to standard gauge in 1870 after the railway became part of the growing Great Western Railway empire [1].

Major rebuilding of the station took place in 1905 when the Great Central Railway and GWR built a new route to avoid the GCR using Metropolitan Railway metals, part of the scheme being the upgrading of the existing line through Princes Risborough. Most of the station's structures date from this rebuilding. The station had a goods yard but it closed in 1966 [3]. A route to Oxford also ran from Princes Risborough but this was closed in 1963.

The station was reduced to a single platform (with a bay) for a long time (London Marylebone of course was threatened with closure in the 1970s and 80s) but in 1999 a new platform was built for down services (and a new footbridge) and also a new through line for none-stopping services has been restored.

Princes Risborough is a busy station with regular Chiltern Railway services to and from London Marylebone to Aylesbury, Banbury and Birmingham Moor Street. Four platforms are in use with some Aylesbury-Princes Risborough services stopping at the bay Platform 1. Access between the other platforms is via a footbridge.